Naxals squeezed out as Govt pushes for development

A multi pronged strategy against left wing extremism (LWE) by the central government these last few years has resulted in a consistent decline in incidents of violence in Naxal affected areas. 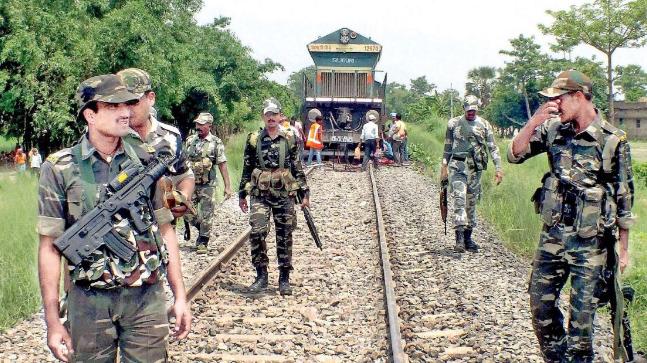 A multi pronged strategy against left wing extremism (LWE) by the central government these last few years has resulted in a consistent decline in incidents of violence in Naxal affected areas. The decline in the number of violent incidents has also coincided with a considerable shrinkage in the geographical spread of areas which were under the influence of Naxals.

A concerted and determined effort by the security forces -–backed by some good intelligence gathering operations on the ground—has without a doubt played a key role in making the threat of red terror look much less menacing in the last few years. This success could not have been achieved without the necessary political will, clarity of thought and a sound and sensitive implementation of the Centre’s consistent and no nonsense policy on the ground. A policy which combines security and development initiatives for maximum impact and long term gains.

Security forces and their efforts are only one side of the coin. Alone they can never have the desired impact on the ground. Development works initiated and executed by the government across the length and breadth of LWE affected states have played a perfect foil to security forces and provided a positive impetus. An optimistic and hopeful narrative about the future—more trustful of the state and wary & suspicious of armed Naxals– is gradually coming into play in the LWE affected areas on the back of these development initiatives.

Development efforts are multi pronged & aimed at benefiting the locals in every aspect of their lives. The last few years have seen a conscious and sustained effort by the Centre to supplement and support development projects of different state government in LWE affected areas in sectors as diverse as road development to skill development, electrification to education, health care to financial inclusion and from installation of mobile towers to having mobile ambulances.

This development outreach has served more than one purpose. It is improving the lot of locals, particularly those living in tribal and remote areas. This improvement in quality of life and prospects of a better future not just helps the villager better counter the misinformation and propaganda campaigns of Naxals but it has also encouraged a large number of LWE cadre to shun the path of violence and return to the mainstream.

Development interventions in LWE areas are made through focussed interventions and implementation of funds made available under different schemes of central government ministries. In addition to the existing schemes, the central government has also approved a special central assistance (SCA) scheme with a three year outlay (from 2017-18 to 2019-20) of Rs 3000 crore. This budgetary provision under SCA has been made to give a fillip to development works in the 35 districts most affected by LWE. Simply put the scheme ensures that each of these 35 districts get an assured funding of Rs 30 crore per annum. This funding will be for special development projects and in addition to the funds coming to the district from different state and central government schemes.

A broad brush overview of the development initiatives in LWE affected areas can be listed under the following categories:

A)Road Connectivity: The road requirement plan of the government envisaged construction of 5422 km of roads and 8 bridges across 34 LWE affected districts in 8 states at an estimated cost of Rs 8585 crore. So far 4720 km roads and 3 bridges have been completed. Of these 1796 km roads at the cost of Rs 3216 crore have been completed in the most difficult terrain in the last 5 years.

Under the road connectivity project for 44 districts in LWE affected areas, the Centre approved the construction of 5412 km roads and 126 bridges at an estimated project cost of Rs 11,725 crore. Of these, an empowered inter ministerial committee has already sanctioned nearly 4350 km roads at an estimated cost of approx Rs 4900 crore.

B) Mobile Connectivity: A sound communication network is as important as roads for both the development and security paradigm in LWE affected areas. In the last 5 years nearly 2500 mobile towers have been installed. In May 2018 the Centre approved phase two of the programme under which little more than 4000 mobile towers will be installed in 96 LWE affected districts across 10 states at an estimated cost of Rs 7350 crore.

Also read: Why the sun set harshly on Hindutva pioneer

C) Skill Development: The ministry of skill development and entrepreneurship (MOSDE) envisaged the establishment of 47 ITIs and 68 skill development centers (SDCs) in 47 LWE affected districts at a cost of Rs 408 crore. Thus far the construction of 21 ITIs and 55 SDCs has been completed.

D) Education: A comprehensive scheme was prepared to open Kendriya Vidyalays (KVs) and Jawahar Navodaya Vidyalayas (JNVs) in the most affected LWE districts. Of the 11 most affected LWE districts which did not have a KV, now 7 have a functional KV. For the remaining four districts as well proposals are in pipeline and likely to be approved soon. Similarly 6 new JNVs were approved and are now functional.

E) Financial Inclusion: No sustainable development model is possible without financial empowerment and keeping this in mind new bank branches, ATMs and post offices have been added at a rapid pace these past few years. Of the 1788 post offices sanctioned in 32 most LWE affected districts nearly 1500 have become operational in the last two years. In a period of about 40 months from April 2015 till August 2018 over 600 new bank branches have been opened and nearly 1000 ATMs have been installed in the 30 most affected LWE districts. This year another 114 bank branches and 26 ATMs have been added in the 30 most affected LWE districts.

F) Another significant effort to give a boost to development and infrastructure works in the LWE areas bore fruit last year when the government gave a go ahead to Home Ministry’s efforts to get the general approval limit for forest clearance from 5 hectares to 40 hectares. Under the new guidelines, proposal for clearance for diversion of forest land up to 40 hectares need not be sent to the Centre and can be approved by a state level committee. This decision is expected to remove bottlenecks and delays which usually came in the way of creating critical public utility services and infrastructure in LWE affected areas.

It is only through this combination of development and governance initiatives – backed by an improved security environment on the ground (which in turn is also helped by good governance measures) – that one day, in not too distant a future, one can hope to see normalcy return in full measure in LWE affected areas.