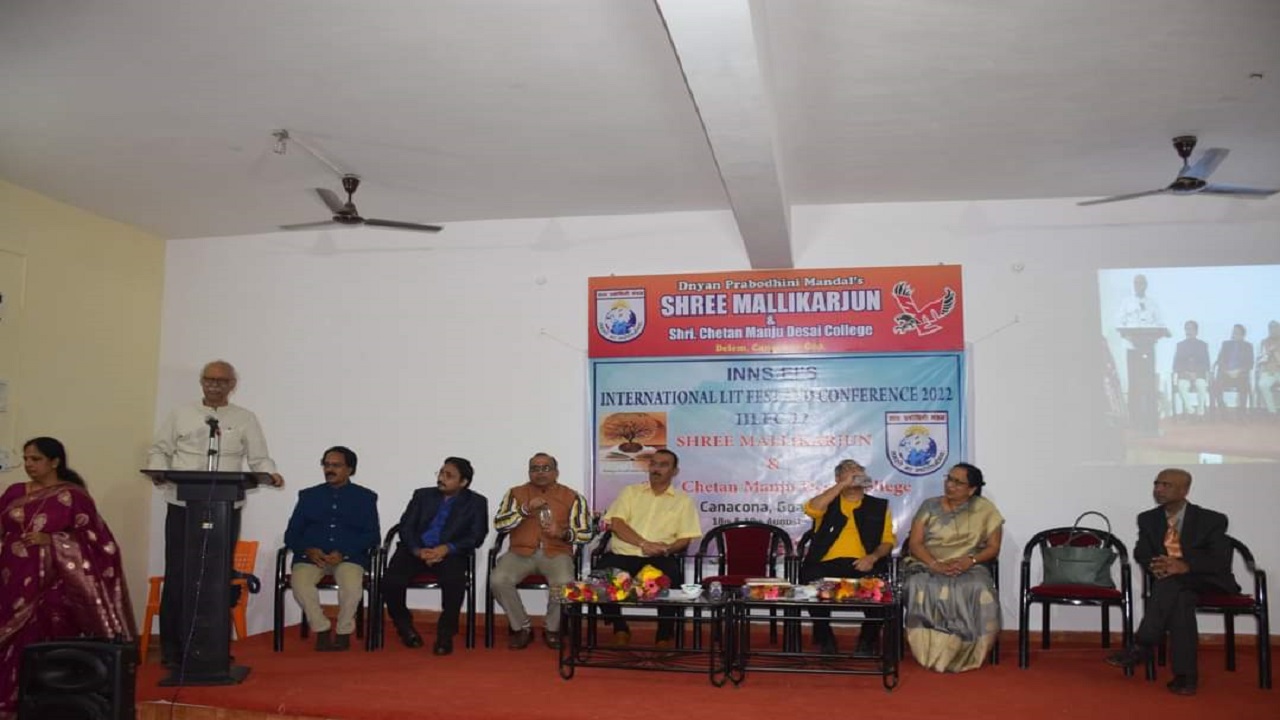 Guests present in the literature conference of INNSAEI.

Inauguration of the Lit. Fest by Damodar Mauzo

The very beginning of the fest was marked by an Art Exhibition named ESSENCE, by Dr. Sanjeev Kumari Paul. Thereafter, the chief guest Damodar Mauzo, Jnanpith awardee in Konkani, in the presence of well-known painter Bhaskar Hande from the Netherlands and the famous writer of Konkani literature and Sahitya Akademi awardee, Devidas R Kadam, lighted the lamp to inaugurate the first INNSAEI INTERNATIONAL LIT FEST AND CONFERENCE 2022 (IILFC22′). Several simultaneous sessions of research paper presentation were also organized.

INNSAEI International Literature Festival was enlightened for the pre-scheduled book launch ceremony. ‘SOUVENIRS OF BEST INDIAN POETRY IN ENGLISH 2021’ by Orbindu Ganga and ‘KAINAAT’ by Dr Tejaswini Patil, were unveiled by Damodar Mauzo, himself. The creme de la creme of the literary world also showered their appreciation in the form of a thunderous round of applause. The book cover of INNSAEI’s first collection of poems, LILITH: Explore Your Inner Voice (Vol. I & II), shared the limelight too. The much-awaited announcement of the title, logo, and website of an upcoming multilingual journal, ‘MatruAkshar’ was also made by the founder members.

Awards were introduced and were bestowed upon the deserving in different categories – Best Poetry, Fiction, Non-fiction, Short Story, Essay, Memoir, and Quote. Hilary Manga (Kenya) was awarded for her outstanding humanitarian work for PEACE AND HUMANITY. Damodar Mauzo, Bhaskar Hande and Devidas R Kadam were all individually honoured for their noteworthy contribution to the world of literature.

A multilingual poetry recitation session from all corners of India stole hearts. The plenary session with enriching talks by Ligia Tomoiaga from Romania and Lucilla Trappazo from Italy received a round of applause. The event was finally accomplished with the grand valedictory ceremony in the presence of Chetan Manju Desai, presenting mementoes to all the hands that joined in, to make the Lit Fest and conference, a whopping success.