Sudhakaran surrender: beginning of the end of Naxal movement? 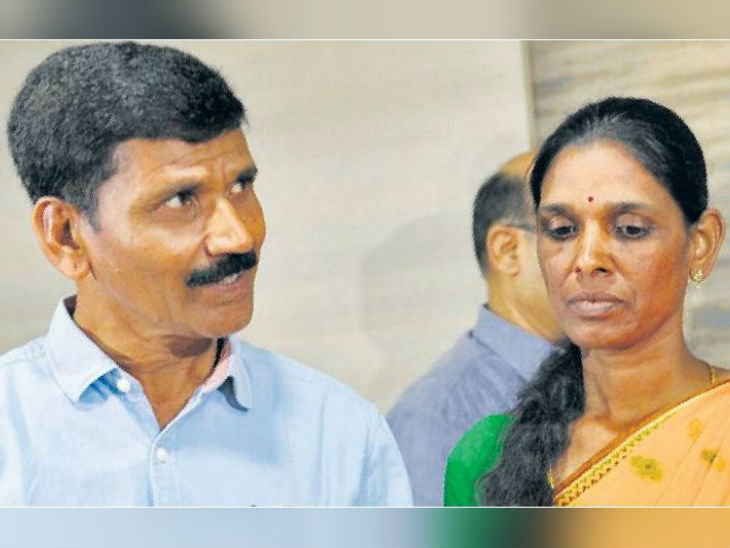 Dreaded Naxal and someone who was on the most wanted list of security forces for nearly three decades Sudhakaran alias Sudhakaranna has laid down arms and surrendered with his wife and fellow Naxal, Neelima Reddy, before the Telangana police. Member of the apex polit bureau central committee of the banned ultra group CPI (Maoist), Sudhakaran’s surrender is being seen as one of the big breakthroughs by Telangana and Jharkhand police in their anti Naxal campaign. The chameleon like wily and ruthless Sudhakaran –whose countless acts of terror and violence included the killing of 73 CRPF personnel in 2010–carried a reward of Rs 1.35 crore on his head. His  wife also carried a reward of Rs 25 lakhs on her head.

Sudhakar, Kiran, Satbaji were amongst the many names with which Sudhakaran had unleashed a reign of terror in the states of Telangana, Jharkhand and Chattisgarh. Member of the state committe, Neelima was no less of a fox and had aliases like Padma, Aruna and Jaya amongst others with which she operated in the core areas of Jharkhand and Chattisgarh. Both Sudhakar and Neelima came from the south of Vindhyas; Sudhakaran from Adilabad in Telengana and Neelima from Warangal.

Fired by the romance of Naxalism and taken in by its ideology, Sudhakaran joined the Naxal movement in 1984. Sharp and wily with great organisational and execution skills, Sudhakaran was soon  noticed by his seniors and his rise in the Naxal hierarchy was swift. By the year 2000 he became a member of the Chattisgarh state committee. This was the time when red terror was at its brutal and violent peak and several Maoist groups had joined forces to unleash a reign of terror in the states  of Bihar, Chattisgarh, Jharkhand, Orissa, Maharashtra and Andhra Pradesh.

Chattisgarh had become the main hub of their operations and Sudhakaran stayed here for 15 years and was a member of one of its most focussed and ruthless groups (Dandkaranya zonal committee). He played a vital role in planning and executing the massacre of 73 CRPF jawans in Dantewara in 2010. The attack which wiped out the Chattisgarh congress leadership in Sukma in 2013 was also allegedly masterminded by Sudhakaran.

But over the years as his penchant for violence peaked so did his greed and lust for material comforts and money. Gradually he also began to acquire the reputation of one of the most unscrupulous extortionists of the movement. He is known to have extorted tens of crores of rupees and in 2017 his brother was also arrested by Jharkhand police while trying to smuggle huge sums of currency and gold. This case was later handed over to NIA and soon the agency declared both Sudhakaran and his wife as absconders. Many campaigns were launched by Jharkhand police to catch the notorious couple but every time they somehow managed to escape the  police dragnet.

Last few years saw anti Maoist operations reach a crescendo and security forces were able to either arrest or kill a large number of ultras. Jharkhand was no longer a safe haven for armed Maoists and even senior and battle hardened Naxal commanders started facing the heat and fearing for their lives. Regular search operations and counter measures adopted by the security forces also meant that Naxal commanders also were not able to stay put at a location for long and their lives became increasingly uncertain and nomadic. They were always on the move and looking for safe hideouts. This was the time that Sudhakaran was given the over all charge of Bihar and Jharkhand and made the head of the special committee of this region. He was also elevated as a member of the polit bureau central committee, the group”s apex decision making body.

After the death of top Naxal leader Arvind ji Sudhakaran moved gears once again and began indoctrinating young locals into the Naxal movement in and around the Budha Pahar area of Latehar, Gadhwa, Simdega and Gumla. His reputation and stature was now reaching a new crescendo and it was keeping this in mind that Jharkhand police adopted a two pronged approach to counter him. As a first measure search and combing operations in the area were intensified. Simultaneously the bounty on Sudhakaran’s head was raised and an additional reward money of Rs. 1 crore was announced on the arrest of 29 hardcore Naxals in the region. All through these years Sudhakaran’s wife Neelima was with her husband, aiding and helping him spread the Naxal footprint.

By 2015 the tide had begun to turn. Joint operations  by security forces in Bihar, Jharkhand and Chattisgarh were gradually breaking the back of Naxals. Sudhakaran was also advancing in years and all the attendant problems which come with ageing were also beginning to take a toll of his life. His reflexes were slowing down and his much vaunted fox like cunning had also begun to desert him. He and his wife Neelima both also started to remain ill. To make matters more difficult the central leadership began to overlook his suggestions and the new entrants appeared more interested in a loot and scoot approach for personal gains rather than having commitment to Maoist ideology. Both he and Neelima were also increasingly shocked by the manner in which women, including fellow Naxals, were being exploited and the whole movement was being reduced to a sex , sleaze and extortion racket.

Sudhakaran was getting old and slow. But he still had enough sense left. Completely disillusioned and frustrated , he decided to get out and surrender with his wife. The surrender of a top Naxal commander like Sudhakaran is not just a big victory for security forces but it raises serious questions about the longevity of the Naxal movement.