His life story follows the script of a Bollywood blockbuster; all necessary ingredients –violence, revenge, pathos, tragedy and finally a happy ending –are all there. So is drama, action and romance! 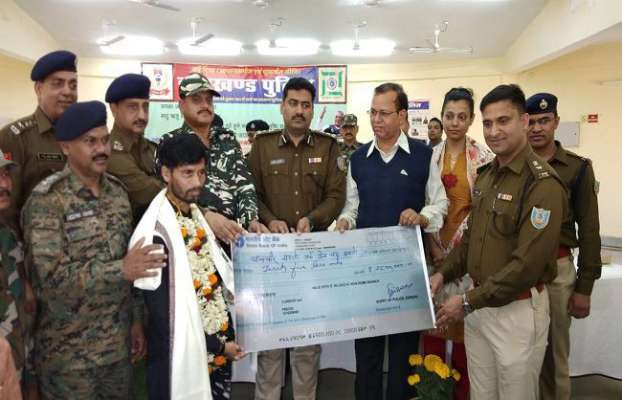 Balbir Mahto’s life story follows the script of a Bollywood blockbuster; All necessary ingredients –violence, revenge, pathos, tragedy and finally a happy ending –are there. So are drama, action and romance!

Domestic disputes & violence saw Balbir Mahato making his escape from a remote village in Jharkhand. The year was 1998. Like countless other dreamy eyed Indians he too landed up in Mumbai. Dreaming to strike gold one day. But fate had other plans for him.

The big bad town of Mumbai is not kind to most fortune hunters who land in this metropolis to look for their pot of gold.  Unable to find a job Balbir found Mumbai to be a cold and ruthless city where he suffered violence and humiliation almost on a daily basis. Frustrated and nowhere to go Balbir decided to return to his roots… but not in the same form and manner that he had left it about 5 years back. He returned as a rebel, a Baghi with a gun in his hand and an ideology of desperation, revenge and mindless violence to boast about. He joined a Naxalite group in 2005 and was soon spreading terror in the jungles. He first served under Commander Anuj da in Chakradharpur area of Bihar. Later he joined the much feared and ruthless area Commander Prakash Yadav’s squad of Jamui. But within a year his luck ran out and in 2006 he was arrested by Chandramundi police of Jamui and put behind bars.

Balbir spent the next four years in jail which instead of reforming him or making him realize his mistakes ended up transforming him into a even more hardened criminal. In 2011, he joined the dreaded Naxalite Prakash Mahato which was one of the most dreaded groups in the region. In 2012 he was part of the notorious squad which –in a daring operation–bombed a police van and successfully freed 6 of his comrades. The operation –known as the Giridih jail vehicle bust operation –soon attained folklore status amongst Naxalites and helped built Balbir’s reputation and stature amongst fellow comrades. Balbir was soon promoted and given a higher responsibility. Now he was a member of the special area committee of north east Bihar.

As he was growing up the ranks Balbir was becoming more violent. He was also the mastermind behind the killing of 6 jawans including the then SP Pakur – Amarjit Balihar. He was also an accused in the Saranda jungle encounter and was involved in two dozen other cases.

It was around this time that Balbir came into contact of another Naxalite, Monika. Soon they became close, love blossomed and the two got married. But Monika’s disillusionment and distress grew, particularly with the manner in which women Naxals were exploited. She started to plead with Balbir to surrender. But Balbir was intoxicated by the cult of violence and terror that he and his fellow comrades unleashed all around them. Power had gone into his head. Instead of paying heed to what Monika was saying he divorced her. One day Monika managed to escape the Naxal camp and surrendered before the authorities in Jamui.

But a life of senseless violence, living constantly under the shadow of fear and a growing realization that he was misled by the so called Maoist ideology was beginning to take its toll on Balbir’s psyche. His health was also playing truant and Balbir –the ruthless commander with a Rs 25 lakh bounty on his head—was increasingly confined to a sick bed. He realized his time as Naxalite and an armed rebel was up. On February 7, 2019, Balbir –one of the most wanted Naxal commander in the region—surrendered before the authorities in Giridih. With the money once announced on his head (Rs 25 lakh) now given as a grant to him to start a new life, Balbir hopes to get reunited soon with Monika and make a new beginning.