Lok Sabha Elections 2019: Indian elections are always hard fought; the contests many times bitter, even vicious. But the 2019 election is easily the most polarising one in our electoral history. 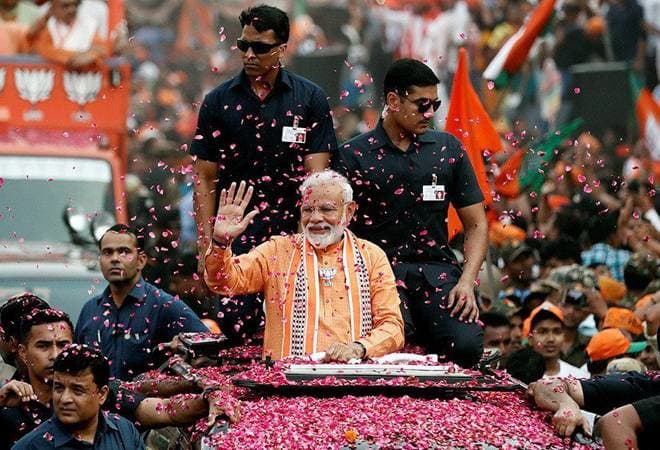 The lead will have to be taken by none other than Mr Narendra Modi.

With three phases of polling in the bag and voting over in 303 out of 543 Lok Sabha constituencies — roughly 55 percent of the LS seats— here are my top takeaways on elections 2019. My assessment is not based on any opinion poll or survey but is the outcome of my understanding of Indian politics and experience of covering elections since 1984. Obviously this is my assessment and it can go wrong. With this disclaimer, let me come straight to my top takeaway.

In my mind there is little doubt about Narendra Modi coming up trumps and getting a second term as Prime Minister. The only point of debate is whether he is coming back to power with the BJP getting 215 odd seats or whether the number be in the range of 240. Mr Modi will become the Prime Minister in either case; the difference really will be as to how much ground he will have to concede to NDA allies and others likely to join his bandwagon if the BJP tally remains around 210-220.

Also read: Why the sun set harshly on Hindutva pioneer

There is no shortage of those who will end up supporting the BJP if the need does arise. Rather than list the potential allies, let us look at those who will most definitely not go with the BJP come what may. This list will have the Congress, left parties, Mamta Banerjee and maybe Akhilesh Yadav as he has a long political innings ahead of him and he may not like to lose his support amongst Muslims for short term gain. So the list of those who will not go with BJP at any cost is a really small one.

Amongst the rest, everyone including the more predictable names like KCR, Jagan and Naveen Patnaik as well as those arraigned on the other side right now like Mayawati, Sharad Pawar, Deve Gowda and Stalin may all be ready to jump ship if the right offer was made by the BJP.

In any case I don’t think the BJP will really fall much short of numbers. In my view a majority of Voters — or let me put it differently; sufficient numbers needed in our first past the post electoral system — in most parts of central, western, northern and eastern India have made up their minds in favour of Modi.

This brings me to my second big takeaway and that is about the north south divide or to put it more accurately how the South Indian electorate has not been as taken in by the Modi persona as their counterparts in other parts of country. Other than Karnataka, the BJP is not making much of an impact in Tamil Nadu, Kerala, Andhra Pradesh and Telangana. So despite all the hype, the BJP is not being able to expand on its seat tally in any significant manner beyond Karnataka.

Now the third big take away. This is the first election in my three and a half decades of journalism when I have come across ordinary people asking a question which otherwise used to be a talking point only amongst politicians and political pundits! The constant refrain from ordinary people across the country about “if not Modi, who?“ is a new phenomenon I am witnessing in this election. The TINA factor till now was only a discussion point amongst those really involved in politics, directly or indirectly. It was never the discourse amongst average voters / common people who voted largely to throw out a government or a leader regardless of who or what the alternative was. It goes to the credit of BJP and Mr Modi that they have been able to sensitize and largely convince people about the narrative that there is no real and credible alternative to Narendra Modi for the Prime Minister’s job.

My fourth big takeaway is about how the BJP’s overall tally is going up because of the congress party’s inability to really challenge the BJP in states where it is in a direct and one to one fight with the BJP. Except Punjab, most other states where it’s a straight contest between the two national parties (Rajasthan, Madhya Pradesh, Gujrat, Uttarakhand and to some extent even Chattisgarh now where BJP has managed to stage a rear guard fight back after a humiliating drubbing in assembly elections) the BJP is not doing too badly vis a vis its peak performance of 2014.

It’s the regional parties with a committed cadre, strong leader and carefully crafted loyal caste equations which are putting up a much better fight against Modi’s BJP. But the efforts of regional parties in states like UP is not making a material difference to the end outcome because of the manner in which congress is succumbing in states where it’s the major challenger to the BJP.

My final and fifth takeaway is the one which disturbs me the most and I wish I am wrong on this one. Indian elections are always hard fought; the contests many times bitter, even vicious. But the 2019 election is easily the most polarising one in our electoral history. The level of discourse has never been more crass and bitter. There is barely any meeting ground between those who are supporting and opposing Mr Modi. It will be a mistake to even think that this narrative of mutual dislike and distrust — bordering almost on hatred on occasions — will very easily return to normal and business as usual after the polls are over. The 2019 elections are almost certain to leave our polity and society divided and scarred. A lot of time, effort and statesmanship will be required to undo the damage. The lead will have to be taken by none other than Mr Narendra Modi.

Also read: Naxals squeezed out as Govt pushes for development